When it comes to successfully breaking bad habits we often buy into the myth that we simply need more willpower.

During motivational videos on Youtube, you’ll often hear successful people say things like, “You just have to persevere!” or “You just need to disciple yourself whether you feel like it or not!”.

First off, I’m not knocking either of these characteristics. If you want to be successful in any domain, perseverance and grit are part of the equation. However, if you’re trying to break bad habits, these two traits aren’t very useful.

Willpower is like a muscle, meaning it gets fatigued each time you use it.

You might be able to resist grabbing a cookie from your pantry for a few days, but eventually you’re going to slip up. And when you do, it’s hard to get back on the path of discipline when you’re fresh off the taste of failure.

So if relying on sheer willpower to break bad habits isn’t enough, what’s the solution?

In today’s article we’re going to talk about how to use laziness to your advantage and get rid of bad habits holding you back from success.

Before we talk about how to use laziness to your advantage, there’s one key principle that needs to be discussed.

Let’s take a look at this graph, courtesy of BJ Fogg. For those of you who don’t know who BJ Fogg is, he’s a behavioral psychologist from Stanford, and is widely regarded as one of the top behavior change experts in the world. 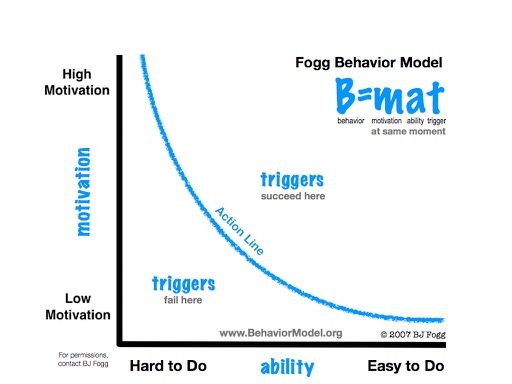 I know that there’s a lot going on here, so allow me to simplify all the noise on this graph so you can understand what Fogg is trying to convey.

Essentially, this graph is Fogg’s model for human behavior. On the x-axis, is ability, which Fogg defines as the difficulty of the behavior being performed. On the y-axis, is motivation, which on this graph represents how motivated we feel to perform a specific behavior.

The upward sloping blue line in the middle of the graph is called the “action threshold.”

Motivation and ability form the data point that shows up on the graph, and a behavior is likely to happen if that point is situated above the action threshold line.

Here’s the main takeaway from this model speaking in the context of bad habits:

This poses a significant challenge because as human beings we act with intent and purpose. Almost everything we do is for the sole purpose of receiving some kind of reward.

Bad habits are often immediately rewarding because they make us feel good temporarily, which means we will almost always be motivated to engage in behaviors that aren’t in our best interest.

Suppose that you get home from work one day and you see a box of cookies on the counter. From the moment you see the box of cookies, your brain starts kicking into full gear.

It has indicated to you that there is potential reward in front of you — the sweet, sugary taste of a cookie that will give you an immediate dopamine rush.

Because the behavior is easy to do, and you are motivated to do it, it’s almost a guarantee that you are going to meet the action threshold and eat the cookie.

However, what if the box of cookies wasn’t in front of you? Furthermore, what if there weren’t any in the house to begin with?

In this case, eating the cookie just became a much more difficult behavior. It would require to get back into your car, drive to the local grocery store, buy a box of cookies, and drive back home. A five second process just became a 20-30 minute ordeal.

As the difficulty of a behavior increases, your motivation to perform it decreases. This means that in all likelihood — unless you happen to be a cookie addict — you’ll probably skip out on the cookie and find something else to do.

This example illustrates the central point that I’m trying to address in this article:

All of your bad habits exist because they provide some sort of reward. When attaining these rewards is easy, you’re more likely to repeat those bad behaviors. Therefore, the most effective strategy for breaking bad habits isn’t relying on willpower, it’s about designing your environment in a way that puts more steps between you and your bad habits.

How to Use Laziness to Your Advantage

Most people don’t know to use laziness to their advantage. It may sound good in theory, but asking yourself the question — How do I put this into practice?

Environment design is one of the most powerful tools you have for improving your life and removing toxic behaviors.

The best part? The lazier you are, the more effective it is. So as you look at your life and examine some of the bad habits that are holding you back, ask yourself this question:

“How can I make these behaviors harder to do?”

If you don’t quite know, where to start, here’s a few practical ideas to get your creative juices flowing:

Bad Habit #1 — Checking my phone too much while working.

How Can I Make This Harder? — Whenever you start working on something, turn off your phone and stick it in another room. (Sidenote: This is hands down one of the best things I’ve ever done for my productivity. This simple action completely eradicates the temptation to mindlessly scroll through my phone).

How Can I Make This Harder? — After turning off your console, unplug all of the connected cords and put them in a backpack.

Bad Habit #3 — Hitting the snooze button and sleeping in

How Can I Make This Harder? — Place your alarm clock/phone on the other side of the room so that you have to force yourself out of bed to turn off the alarm. Since you’re already up and moving, you’ll be much more likely to start your day.

How Can I Make This Harder? — Lower the difficulty of your task. Commit to starting the task for only two minutes, and tell yourself that you are free to stop afterwards. Oftentimes, this initial momentum will carry you forward for another 20-30 minutes, or even a couple hours.

How Can I Make This Harder? — As you start to wind down for the night, put the remote to the TV downstairs in a drawer. If you’re watching on a computer, put your computer in a backpack and put the backpack in a cabinet.

The theme here is the same, if you want to break a bad habit, simply increase the friction associated with the behavior.

Your brain is always looking for the path of least resistance, which is why we develop bad habits develop in the first place.

However, you can completely flip the script on your bad habits by designing your environment in a way that sets you up for success. That’s how to use laziness to your advantage instead of letting it ruin your life.